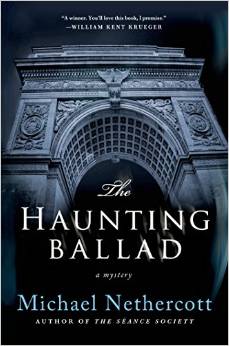 The Traditional Mystery Tales of O’Nelligan and Plunkett

The detective team of Mr. O’Nelligan and Lee Plunkett are featured in the novels The Séance Society and The Haunted Ballad, from St. Martin’s Press (Minotaur/Thomas Dunne.) In The Séance Society, murder intrudes on an eccentric circle of ghost seekers. In  The Haunting Ballad , the detectives take on a case in the Bohemian swirl of the Greenwich Village music scene. O'Nelligan Plunkett have also appeared in numerous shorter tales:
The novelette "The Soul of Peg O’Dwyer" (March/April 2021 Alfred Hitchcock.) A mystery with reincarnation at its core.
The  short story "O'Nelligan and the Beautiful Dreamer" (Jan/Feb 2017 Alfred Hitchcock.) A prophetic child asks assistance.
The novelette “O’Nelligan and the Lost Fates” (March 2012 Alfred Hitchcock. ) A fortune teller, a fatal fall, and a wealthy man who buys the fates of others. (Finalist for the Shamus Award for best short mystery.)
The novelette “O’Nelligan and the Perfect Man” (December 2009 Alfred Hitchcock.) Stolen artwork, a dead curator, an impeccable gallery owner.
The novella “O’Nelligan’s Glory” (winner of the Black Orchid Novella Award; published in Alfred Hitchcock Mystery Magazine July/August 2009 issue; chosen for inclusion in By Hook or By Crook: The Best Crime and Mystery Stories of the Year, published November 2010) The detectives take on the “Glory Table” murder.

The Plunkett/O’Nelligan tales take place in the mid-1950’s. Mr. O'Nelligan is an Irish-born widower in his early sixties living in the small town of Thetford, Connecticut. His past professions including train conductor, schoolteacher, bricklayer, door-to-door salesman and actor. Also, in his youth, he fought in his homeland’s civil war, though he prefers not to dwell on that period. He is a devotee of classic literature and quotes Shakespeare and William Butler Yeats freely. Mr. O’Nelligan could be described as witty, analytical, pragmatic, warm, compassionate and scholarly. He fits the "amateur sleuth" designation, although he is, in fact, assisting Lee Plunkett, a young man who has reluctantly inherited his father's private eye agency.

Though Lee Plunkett is the one with the official investigator's license, he is, in a sense, actually the "Watson" of the duo, as well as the narrator. As he himself puts it, “In my tenure, it was a struggle just to handle the infidelity and missing object cases. Dad had taken me on to give direction to my drifting life, but, within sixteen months, had died over a bowl of stew, leaving me to fumble on. Truth be told, in the year since my father’s death, I hadn’t done much to champion the family business.” That is until Mr. O’Nelligan becomes his de facto assistant and helps Lee come into his own. The unlikely pair forge a bond to take on matters of murder and mystery. 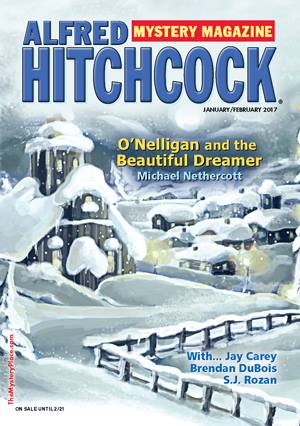