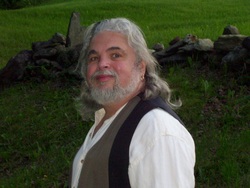 A WEE BIT ABOUT ME


My mother’s parents were off-the-boat Irish from County Kerry, while my father’s ancestry drew from both Ireland and Italy. I, being the sum of that, consider myself Irish-American, with a fistful of Italian for flavor.

I count myself as a New Englander, despite the fact that I spent my first seven years in New York State. I grew up in Connecticut, spent a good chunk of my twenties in Massachusetts, lived one summer in Maine, one winter in New Hampshire, and eventually settled in Vermont. There I met my wife and co-authored my daughter and son. 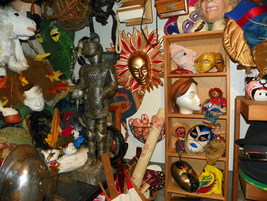 My prop room (like all men have...)
My path through life has been a somewhat curvy, nonconventional one. At different points (not necessarily in order) I’ve been a performing clown, storyteller, director, actor, backpacking traveler, house-dad, organizer of theatrical events, door-to-door fundraiser, and co-owner of a cooperative natural food restaurant. I also spent a couple summers with my kids touring as a family act, offering shows at numerous Vermont libraries. And from time to time, I’ve organized personalized adventures for individuals, rites of passages in a sense, involving theatrics, introspection, and physical challenges (kind of hard to explain.) I have a life-long love of history, literature and supernatural tales; themes which tend to keep popping up in my work. 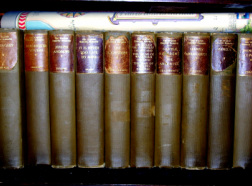 In the midst of this hodgepodge, there has been one constant: writing. Over the years, in addition to prose and playwriting, I’ve put my hand to different genres and forms and have appeared in various national periodicals. Additionally, I’ve conducted writer’s workshops in various forums, and have led prison workshops for the PEN American Center,  a program which encourages inmates to write and share poetry and prose.

I’ve no doubt done other things in my life, but who can keep track of it all?